The steeped walk down Pier Hill will bring you to where Cockney’s go, or at least went, on holiday. The seafront, a golden mile of arcade machines, fast food joints and adventures islands is the home to Chinnerys. In itself, the Seafront has had a facelift over time and the new fountains and architect grey pedestrian area has created a far more friendly feel compared to the rough-around-the-edges 80’s and 90’s when I was growing up here.

The scent of the sea is strong here, especially when the wind gets up. On a hot summers day the smell of molten fat from donut machines is interlaced with the salty air. For me, this nostalgic smell brings back memories of my Great Grandmother. We would watch the raw donut dough ooze out the pipe at one end of a conveyer and into a flowing river of searing fat only to be flipped into a pile of sugar at the other end.

During my teenage years, that’s the 90’s by the way, the seafront was the place you’d go to if you had a Vauxhall Nova. Not just any Vauxhall Nova, one that had been adapted to have an extraordinarily large exhaust pipe (tail pipe) and a sound system that could blow the windows out. The cars were like Peacock feathers but unfortunately those driving were far from Peacocks. They’d wear hoodies and the majority had developed some type of Bad-Boy limp.

If you asked the nearest Essex man where you could find a gangster he’d probably tell you the town he’s from. And Southend-on-sea is no different. It is fully stocked on want-to-be-gangsters. Parts of the film Essex Boy’s was shot here. Quite fitting really as the story revolves around this part of Britain.

This Seafront is intrinsically part of me. It’s the start of my journey into music and it’s ultimately part of this Brand too. Without it, my life would have been very different. 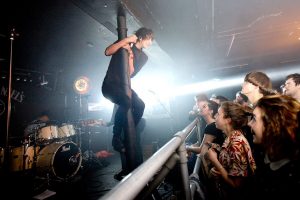 Chinnerys, in Southend on Sea, was where I first learnt to cut my teeth in the live music industry. The venue really started as a proper gig on the touring circuit in 1998 following the closer of the Esplanade.

The list of concerts that have been through this place is quite astounding. Some of the bands include Skindread, Reef, Ash, Adam Ant, The Artic Monkeys, Ellie Goulding, The Horrors, Baby Shambles, La Roux, Get Cape Wear Cape Fly.

Small, independent venues like this have been hit really hard over the last 10 years. As money has been pulled out the music industry at a rate of knots, independent promoters have seriously suffered. As so many venues have gone to the great gig in the sky, Chinnerys is a testament to the hard work that Glyn Morgan and his team have put into that venue over the last 20 years. 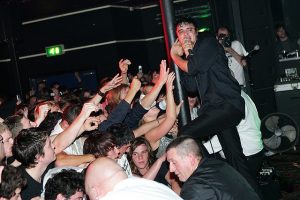 My own story starts before this at Maple Studios, or Maple Pro Audio as it is now. One of Southend’s leading rehearsal spaces which has over time developed to be a recording studio as well. This was the place where Glyn first took me under his wing.

I was lucky to be involved in this place. There were so many strings to the business that we all had some great experience in most elements of the live production industry, and this is where Chinnerys came in.

We use to do these all day events. All sorts of music would come through there. It’s actually one of the first places I saw these really cool flat-rim truckers caps for the first time. When designing our Signature SnapBack cap I remember back to these 20 hour days.

Get Future Updates Straight To Your Inbox

Born with all the correct fingers, toes, arms and legs into the cockle-picking town of Southend-on-Sea, Essex, UK, Dave Swallow spent his formative years surrounded by the many delights a British Seaside town has to offer. Or at least this seaside town; The world’s longest pleasure pier, for example, mud and the inability to sound a consonant, which is very much an Essex thing but it’s South Essex that really take it to another level. Leaving school, minus a tooth (cousinly inflicted), was a daunting prospect. Dave hated salt water, so cockle-picking was out, and he was about as gangster as Harry Potter… [click_here_to_read_more]